California Challenge Championships Have Arizona Stars
Jess A Cowboy is one of the Arizona horses representing in California. . 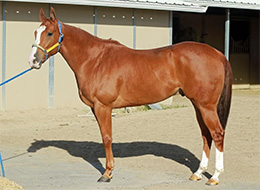 There are several Arizona hopefuls in the headliner $225,000 Bank of America Challenge Championship (G1), and two of them have connections to Larry Stark of Prescott, Arizona.

Both horses, Jess A Cowboy and Arizona Icon, will be saddled by Matt Fales.

Jess A Cowboy was bred by Larry and his wife, Phyllis, and will race in Larry's name. Larry has been a rancher his whole life, and got into racing in 1980. He and Phyllis have also bred horses for more than 10 years, and in their own names have seen their runners average more than $32,000 per starter.

The 5-year-old Jess A Cowboy is by the Mr Jess Perry stallion Dejon and out of the Canth mare Secret Return, a mare that Stark also bred that is now owned by the Faleses. Secret Return won five stakes races, and nine of her 27 starts earned her $74,515. Her dam, Secret Orders, was herself a stakes-placed runner.

"(Secret Return) is 21 years old now, and still has a yearling coming up," Stark said. "We're very happy with her foals.

They are really kind horses, really good gate horses. Easy to train, easy to be around  she passes that on to her offspring."

Secret Return has produced the earners of more than $310,000, including stakes winner Cowgirl N Up and stakes-placed runner Redneck Woman.

Jess A Cowboy is her single most successful runner, having himself earned $189,879. He has won or placed in 24 of 33 starts, including seven stakes wins. He enters the Challenge Championship off a rallying second-place finish in the John Ward Handicap on October 27.

"He's been a really nice horse," Stark said of the hard-knocking gelding.

Stark was the ranch manager for Las Vegas Ranch in Prescott for about 30 years, but retired in 2006. Las Vegas sends out Arizona Icon in the race. Stark first started racing horses about 40 years ago, and got the family interested in racing.

He is the namesake of champion All About Larry; while working there, Stark sold All About Larry's dam to owner Diane Heath when the mare was in-foal with the eventual Grade 1 winner and earner of $191,464.

Las Vegas Ranch has bred the earners of more than $500,000, headlined by All About Larry but also including Arizona Icon. The 2014 gelding is by Texas Icon and out of the Feature Mr Jess mare Jess Perfect Girl.