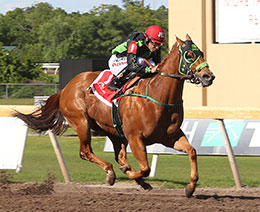 Jesse Levario has been in the saddle for all of those victories and went gate to wire in winning the Bank of America Remington Park Challenge at 440 yards. He got up to win by three-quarters of a length over runner-up Mi Amor Secreto and was another neck ahead of DF AJ Green Leaves in third. 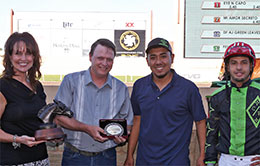 "He's a really good horse," Ponce said. "He travels well, hauls in well and we'll just wait for him to come back from this race to see what's next. Probably Louisiana or Texas."

Eye N Capo's cut of the purse for winning was $31,483 and his record improves to 18 starts, 11 wins, three seconds and two thirds for a bankroll of $527,393. He has won two of four tries at Remington Park. A gelded son of Capo de Capi, out of the Mr Eye Opener mare Satisfeyen and was bred in Oklahoma by Dee and Betty Raper.

Runner-up Mi Amor Secreto races for owner/breeder Kelly Perez. Marcos Carrizales trains the son of multiple stakes sire The Louisiana Cartel from the Feature Mr Jess mare Streakin In Secret. Jose Alvarez was aboard last year's Ruidoso Derby Challenge winner to pick up $13,688 for second. The chestnut gelding has banked $124,537 in three seasons at the track.

Racing resumes Thursday with race one set for 6 p.m., with 11 races on tap.

Tracked by more than 153,000 fans on Facebook and more than 9,900 Twitter followers, Remington Park has provided more than $216 Million to the State of Oklahoma general education fund since the opening of the casino in 2005. Home to the historic Grade 2 Oklahoma Futurity, to be run for the 78th time on March 23, 2019, Remington Park is located at the junction of Interstates 35 & 44, in the heart of the Oklahoma City Adventure District. For more information, reservations and group bookings please call 405-424-1000, 866-456-9880 or visit remingtonpark.com.