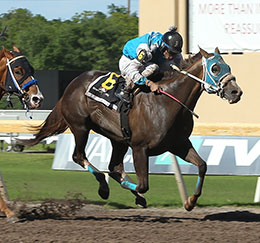 Ms Esther Runs Virtual Replay Of Her April Stakes Victory, Winning Grade 3 Remington Park Distance
OKLAHOMA CITY, OKMAY 12, 2019Apparently Ms Esther didn't convince a lot of backers she was the real deal when she won the $50,000 Pauls Valley Stakes at Remington Park on April 27, but she solidified her place as the top distance horse of the meet, winning the Grade 3, $40,299 Remington Park Distance Challenge on Sunday.

It was a virtual replay of the Pauls Valley as jockey Andrew Samaniego dropped over from the 6-hole in the early going and made up ground every step of the way on the rail, catching front-runner Madewell late to get up for the victory. He came from last to first to win the Pauls Valley.

No one was more excited about the victory than owner-trainer Jordan Baumann of Sallisaw, Okla. This 5-year-old mare was purchased in training for a song, according to Baumann, and he turned her into a hook horse shortly after buying her. All she's done since he started sending her around a turn at 870 yards is win five of seven tries, including the two stakes victories. 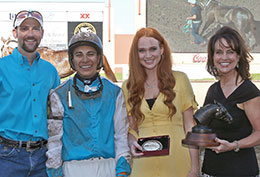 AQHA Chief Racing Officer Janet VanBebber with daughter Taylor (left) presents winning owner-trainer Jordan Baumann and jockey Andrew Samaniego the AQHA Remington Park Distance Challenge stakes trophies on Sunday.
© Dustin Orona Photography
"She sure likes 870," Baumann said after winning the Distance Challenge. "I really didn't know she would be this good. I just knew it would be fun running her at a distance and we would find a place for her that fit that. Hopefully we will win the Distance Championship at the end of the meet."

The breeding of Ms Esther suggests that Baumann's suspicions just might be true. She is a daughter of Afrashad, a thoroughbred, out of the Tres Seis mare, Tres Down the Cash. It's proven to be a lucrative deal for Baumann, who said he didn't want to say how much he paid for the mare because it was so little. She earned $19,344 for Sunday's win and now has a lifetime record of six wins in 10 starts, one second and one third for a bankroll of $99,416. At 870 yards, Ms Ester has earned $91,386 of that.

Runner-up Madewell races for owner-breeders Ray and Davy Madewell. Tammy Kay Johnson saddled the Oklahoma-bred son of stakes sire Jess Jones from the A Streak Of Cash mare Streakin Peacock. Madewell picked up $8,261 to boost his earnings mark to $69,111. Daniel Torres had the riding assignment.

Flight Force, under champion jockey Ricky Ramie, finished one-length back for owners Scott Bryant and Joe Dee Brooks. Michael Joiner trains the 4-year-old son of One Famous Eagle from the Strawfly Special mare Modice. Bred in Oklahoma by Bobby D. Cox, Fight Force picked up $4,030 to bring his bankroll to $62,390.

Racing resumes Thursday with race one set for 6 p.m., with 11 races on tap.

Tracked by more than 153,000 fans on Facebook and more than 9,900 Twitter followers, Remington Park has provided more than $216 Million to the State of Oklahoma general education fund since the opening of the casino in 2005. Home to the historic Grade 2 Oklahoma Futurity, to be run for the 78th time on March 23, 2019, Remington Park is located at the junction of Interstates 35 & 44, in the heart of the Oklahoma City Adventure District. For more information, reservations and group bookings please call 405-424-1000, 866-456-9880 or visit remingtonpark.com.