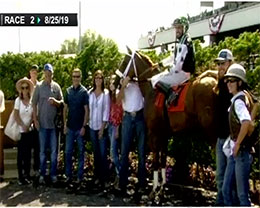 AUBURN, WAAUGUST 25, 2019The third time was the charm for the Thrill Of The Cartel; the 2-year-old won his first career stakes race on Sunday at Emerald after qualifying for two futurities earlier this summer in Idaho.

The $34,969 John Deere Emerald Downs Juvenile Challenge was the second of three regional Challenge races at Emerald on Sunday afternoon. Thrill of the Cartel and Jesus Canales covered the 350 yards in 18.265 and earned an 88 speed index in the win.

Thrill Of The Cartel ($13.40) is trained by Mark Hanson for owners Hanson Racing LLC, Robin Dunn and Kevin Dunn. He was bred in Texas by Fulton Quien Sabe Ranches LP, by Favorite Cartel and out of License to Thrill, by Mr Jess Perry.

The gelding won his debut, a trial for the Rocky Mountain Spring Classic at Pocatello and finished third in the final in May. He won his trial for the Bitterroot and finished fifth in that final in July at Sandy Downs. With three wins in five starts, Thrill of the Cartel has earnings of $25,160.

Senor Frogs and Jamie Lopez were bumped at the start but overcame the break to finish a head behind Thrill of the Cartel in second place. Senor Frogs is owned and trained by Freddy Ibarra and was brd in Oregon by Michael and Shannon McKay. The son of Coronado Cartel is out of Nellie Soprano, by Mr Eye Opener.

Royal Pay Bac and Alex Anaya completed the trifecta as the second-favorite for trainer Juan Sanguino and Sanguino Racing, LLC. He was bred in Oregon by Tamyra McBride, by Radical Splash and out of the Sixes Royal mare My Desert Sage.