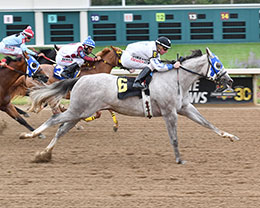 Divas First Moon ($3.20) and jockey Stormy Smith won the first 350-yard trial in :17.886, three-quarters of a length ahead of third fastest qualifier One Famous Blue.

Divas First Moon was a heavy favorite in the trial after exiting back-to-back stakes in her two previous starts. She recently won the $15,000 1889 Futurity at Canterbury Park; prior to that, she was second in the $16,600 NDQHRA Futurity in Fargo for North Dakota-breds.

The 2-year-old daughter of First Moonflash is trained by Bob Johnson and is bred and owned by David Wisdom, out of Shake Em Diva, by Royal Shake Em.

Kina Big Deal ($25.00) is trained by John Hammes. He is owned and bred by Lisa Beauprez and the Estate of Thomas Bradbury, out of Teller Sheza Doll, by Teller Cartel.

Kina Big Deal recently qualified for the $75,000 Cherry Creek Futurity at Arapahoe and broke his maiden in the trial win for that race.

Garcia was also aboard third fastest qualifier One Famous Blue with a time of 17.975. One Famous Blue is also trained by John Hammes and is owned by the Estate of Thomas Bradbury; she was bred in Louisiana by Earl Landry Jr. and Randy Rodriguez.

One Famous Blue is by Jess Louisiana Blue and is out of the One Famous Eagle mare One Fancy Eagle. This will be her first appearance in a stakes race.