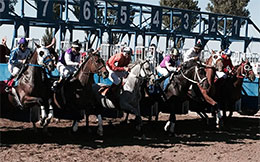 The 10 fastest qualifiers will return to Pocatello Downs on Sunday, September 15th to vie for the winner's share of a $27,500-added purse as well as earn a starting spot in the $125,000-est. John Deere Juvenile Challenge Championship(G2) at The Downs at Albuquerque October 27.