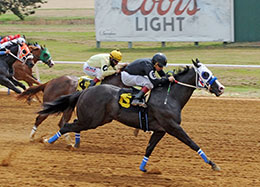 The 10 fastest qualifiers, from two trial races contested today, will return to Will Rogers Downs on Sunday, September 22nd to vie for the winner's share of a $35,000-added purse as well as garner a starting spot in the October 26th $125,000-est. John Deere Juvenile Challenge Championship(G2) at The Downs at Albuquerque.

Trainer Samuel Valdivia saddled the Oklahoma homebred for owner-breeder Dustin R. Cox. The son of second-crop sire Im A Fancy Pyc has compiled a (7) 4-0-2 record this season and banked nearly $104,000.

Out of the My First Moon mare First Ginlark, he was third in the Remington Park Juvenile Stakes in April and a finalist in the Grade 1 Heritage Place Futurity at Remington last June.

Coming off a maiden win at Fair Meadows in her last start, Americanna held for the second fastest time of :17.719 seconds, a 92 speed index. Luis Villafranco conditions the daughter of champion American Runway for Palomino Trucking, Inc.

Bobby D. Cox bred the sorrel filly in Texas from the Corona Cartel mare Corona Edge. She has compiled a 1-1-1 record from five starts and banked $10,751. The John Deere Oklahoma final will be her first stakes appearance.

Valiant Lota was a wire-to-wire one-length winner in the opening trial, under jockey Alfredo Triana, Jr., to get the third fastest time of :17.725 seconds, also a 91 speed index.

A winner of her last three starts the daughter of leading third-crop sire Lota Pyc has been well traveled this season. Valiant Lota made her debut at Remington Park then finished fourth in a trial for the Robert Adair Kindergarten Futurity at Los Alamitos.

She broke her maiden at Canterbury Park, then came back and won allowance at the Minnesota raceway before winning her John Deere trial today.