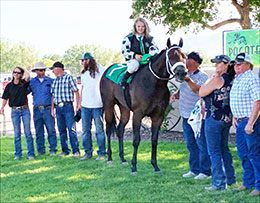 POCATELLO, IDSEPTEMBER 15, 2019Sables Dashin broke his maiden and earned a spot in the Challenge Championships with a win in Sundays $48,400 John Deere Idaho Juvenile Challenge at Pocatello Downs.

Nakia Ramirez was aboard Sables Dashin for their three-quarter length win in the 350-yard stake; they posted a final time of 17.913 and earned a speed index of 88.

Sables Dashin ($6.80) is owned by RTM Stables LLC, Larry Chapple and Robin Dunn. He was bred in Oklahoma by Bob Moore Farms, by FDD Dynasty and out of Painted Sable, by Pyc Paint Your Wagon. Painted Sable is a multiple stakes winner and finished second in the Merial Distaff Challenge Championship (G1) at Prairie Meadows in 2012.

Sables Dashin was the third fastest qualifier and finished second behind fastest qualifier Meghans Feature Sign in the first of three trials on September 1, held at Blackfoot. He has finished in the money in four of her six career starts and has earnings of $25,038. Before the trials for Sundays final, he competed in the John Deere Emerald Downs Challenge in August.

Brilliant Cut Cartel was ridden by Jesus Canales, this time for the ownership group of RTM Stables, LLC, Robin Dunn and Kevin Dunn.

The Coronado Cartel gelding was bred in Oklahoma by Monty McNair out of Azoom Diamond, by Azoom.

Brilliant Cut Cartel broke his maiden in his debut at Pocatello in May and has competed in the Bitterroot Futurity at Sandy and the Oneida County Futurity. He was the second fastest qualifier.

The multiple stakes placed filly qualified to the Harrahs Futurity (G3) at Louisiana Downs in March and finished third in the Wyoming Downs Futurity in August.