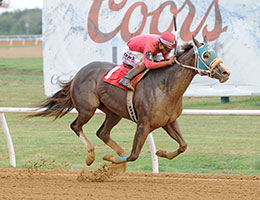 Ms Esther Beats the Boys in the Will Rogers Distance Challenge

The 870-yard stake was the first of four Challenge races on Sunday at Will Rogers. The final time was 45.576; the winner earned a 95 speed index.

Ms Esther ($4.80) and jockey Alfredo Triana Jr. made up ground late to pass post-time favorite Madewell in the stretch. Ms Esther is owned and trained by Jordan Baumann. She was bred in Oklahoma by Duwyne and Janice Pfeifle, by Afrashad and out of Tres Down the Cash, by Tres Seis.

This was the third stakes win for Ms Esther, who won the Grade 2 Pauls Valley Stakes at Remington, followed by the Grade 3 Remington Park Distance Challenge. 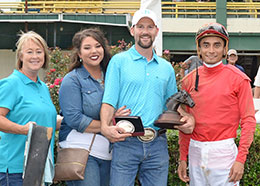 The 5-year-old mare debuted in a maiden claiming race in 2017 at Remington and won three of her five starts that year. She made just one start in 2018, a victorious optional claiming event, and took a year off before returning to compete in four stakes this spring and summer.

Madewell and Daniel Antonio Torres finished in second, nearly two lengths ahead of third-place finisher Eye M Smokin. The 5-year-old gelded son of Jess Jones is trained by Tammy Kay Johnson and is a homebred for Ray and Davy Madewell. He was bred in Oklahoma out of Streakin Peacock, by A Streak of Cash.

Eye M Smokin and Travis Cunningham rounded out the trifecta for trainer Luz Chavira and owner Sheila Dorgan. Sandra Garnett Tatom bred the gelding in Texas by Rock Solid Jess and out of the Mr Eye Opener mare Chicks Fleye.

This was the first stakes appearance for Eye M Smokin, who spent most of his career in the claiming ranks in Oklahoma.

Completing the field were Bout Tree Fiddy, Cartel Attitude and Fds of Seattle. Rock a Billy was scratched.