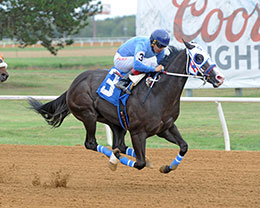 CLAREMORE, OKSEPTEMBER 22, 2019Jay Number 7 and Jose Vega dominated the field in the $45,628 John Deere Will Rogers Juvenile Challenge at Will Rogers on Sunday, the last of four regional Challenge qualifiers on the card.

Jay Number 7 ($3.80) is trained by Samuel Valdivia for owner and breeder Dustin Cox, who bred the gelding in Oklahoma. He is by second-crop sire Im A Fancy Pyc and is out of First Ginlark, by My First Moon. 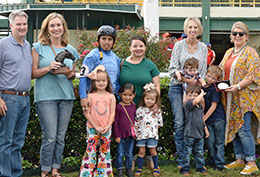 Jay Number 7 won his trial to Sundays final and has won five of his eight career starts. He finished fifth in the Heritage Place Futurity (G1).

Valiant Lota and Rrelentless dueled to the wire to finish second and third, respectively, separated by a neck.

Valiant Lota also won her trial and was in search of her fourth consecutive win, including maiden and allowance wins at Canterbury this summer. The Lota Pyc filly was bred by Haulin Assets Racing in Oklahoma, out of the Valiant Hero mare Valiant Chic.

Graded stakes winner Rrelentless finished third with Cody Smith up for trainer Gregg Sanders. The Hes Relentless colt is owned by Rrelentless Partners and was bred in Oklahoma by Bill Robbins, out of the First Down Dash mare First a Princess.

Rrelentess qualified to the Oklahoma Futurity (G2) at Remington this spring and won the John Deere Ruidoso Downs Juvenile Challenge (G3) this summer.