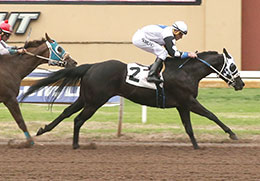 While Higher Flyin Eagle was flying high, so were thunderstorms producing lightning in the Oklahoma City area, forcing cancellation of the final three races on Saturday nights card  eight through 10.

Ms Esther and Madewell may have had better resumes, but Higher Flyin Eagle beat them Saturday and does love the 870-yard distance, staying undefeated after winning for the second time around the hook.

He is a 4-year-old gelding by Favorite Cartel, out of the Separatist mare Royaltime Separatist and covered the distance in :45.349 over the fast track, good for a speed index of 95. 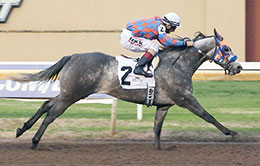 Clint Crawford trains Higher Flyin Eagle for owner Joel Pierce of Sallisaw, Okla. He earned $4,080 from the $6,800 trial purse Saturday night and now has made 10 starts, won four and has three thirds for total lifetime earnings of $33,397.

It was Higher Flyin Eagles fourth victory in his last five starts. Two of those wins came at 440 yards. He was bred in Texas by King Camden Running Horses.

In the second trial, James Burgess' homebred JB Gray Dawn defeated multiple stakes winner Jess A Hilbilly Bone by a 1-½ lengths to get the second fastest clocking of :45.448 seconds. Gary Walker saddled the son of champion sire Heza Fast Dash out of the Preachinatthebar (TB) mare Skyline Dawn Too. Jockey Alfredo Triana, Jr. had the riding call aboard the seven-time winner of $55,734.

As weather canceled the final three races Saturday, the Sooner 6ix wager was refunded as by rule at least four races of the multi-race sequence need to be completed. Only three of the six were conducted Saturday. The carryover to Thursday, April 16 is $35,144.78.

No racing is scheduled for Easter Sunday, but 10 races are scheduled for Thursday with a first post time of 6 p.m. Also, starting April 19, post time for Sunday racing will be changed from 1:30 p.m. to a first start to 6 p.m.