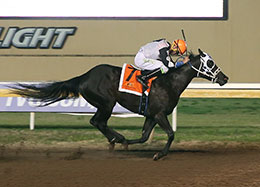 I begged, he said after this 4-year-old gelding kept his undefeated streak going at 870 yards, winning his third in a row in the stakes on Sunday night at Remington Park. The stakes event is part of the American Quarter Horse Associations Challenge Championship series.

Curtis Kimes had ridden Higher Flyin Eagle to victory at Will Rogers Downs in Claremore, Okla., the first time the gelding tried 870 yards and won in October 2019. Trainer Clint Crawford then gave the gelding some time off from that start until Remington Parks current meet.

When he came back from the layoff, Crawford gave him a tighten-up race at 550 yards on March 20 and then pointed him toward 870 yards again. Higher Flyin Eagle responded in kind. He won his trial for this final on April 11 and then won Sunday night in wire-to-wire fashion, scoring by two lengths over Madewell who was second with Ms Esther in third, another head behind the runner-up.

Despite his prowess around the hook, the betting public let him go off at generous 3-1 odds, and there was good reason for that. Ms Esther was made the wagering favorite at 6-5 odds because she was the 2019 Remington Park Champion Distance horse.

She was making her patented close at the end of the race but could only get up for third, a head behind runner-up Madewell. After Madewell had lost to Ms Esther last year by a neck in this race, he then turned the tables on the champion in the Remington Park Distance Championship on the seasons closing. Those two took a lot of the money tonight.

Hes as good as any hook horse Ive been on, said Romero of Higher Flyin Eagle. He should know. He won this race for the second time in the past three years. He also won with CJs Rocksolid for trainer Tammy Johnson.

He relaxes when he gets to the front and he gets there quick, said Romero. Then he has the stamina to hold on at the end.

Romero said his own background in riding Thoroughbreds gives him the knowledge he needs to ride at 870 yards for Quarter Horses.

Ive ridden a thousand Thoroughbreds, and that helps, he said.

Higher Flyin Eagle is a gelded son of Favorite Cartel, out of the Separatist mare Royaltime Separatist. He now has raced 11 times in his career, winning five times, and running third three times for a bankroll of $52,740. He took home $19,343 from this purse for owner Joel Rod Pierce of Sallisaw, Okla. Higher Flyin Eagle was bred in Texas by King Camden Running Horses Inc.

It never crossed Romeros mind to let off the gas despite the early daylight advantage his winner produced out of the gate.

I knew in the back of my mind, Ms Esther was coming, but when I got to the eighth-pole and asked for more, he gave it to me, Romero said. When he did, I knew we had won.

It was Crawfords first victory in the Remington Park Distance Challenge as well as Pierces.

Also a multiple stakes winner Ms Esther earned $4,030 for her third-place effort. Racing for owner-trainer Jordan Baumann, the 6-year-olds daughter Afrashad (TB) from the Tres Seis mare Tres Down The Cash has banked $167,577. Benito Baca had the riding call aboard the multiple graded winner.

Jess A Hilbily Bone, Dane The Dust Off, High On Chablis, The Louisiana Dream and Jess A Final Diva completed the field.

Racing is scheduled to continue, with no public spectators, with Thursdays 10-race card. The first race Thursday through Sunday, April 30-May 3, takes place at 6pm-Central.