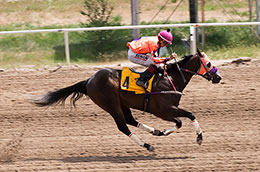 OGDEN, UTMAY 10, 2020In the first of three sets of trials on Sunday afternoon at Weber Downs, Dr Tool emerged as the fastest qualifier for the $30,000-added Adequan Weber Derby Challenge. The 400-yard final will be held May 24.

Dr Tool cleared the rest of the field by two lengths in the first of two trials and set the fastest time of 19.948, earning a 106 speed index. Dr Tool was ridden by Jesus Valenzuela for owner and trainer Luis Gonzalez.

The 3-year-old son of Kiss My Hocks was bred in Texas by Andy Caulo, out of the One Famous Eagle mare Where Eagles Soar, whose dam is multiple graded stakes winner Sixy Thru Traffic. The trial win was his first in eight career starts; last fall, he was third in the La Fiesta Futurity at The Downs at Albuquerque.

The winner of the second trial, Calida, posted the second fastest time of 20.145 and earned a speed index of 101. Calida is a 3-year-old daughter of FDD Dynasty, out of The Fire Fly, by Sixes Royal.

Calida was ridden to victory by Eric Ayala for trainer Monty Arrossa. She is owned by Lex Fabrizio and was bred in California by Lazy Creek Ranch. She is now two for six lifetime; her previous win was in the Roche Equine Futurity at Jerome last June.

Calida finished a neck in front of Shes Emotionless, the third overall fastest qualifier with a time of 20.177 and a speed index of 99.

Shes Emotionless was ridden by Oscar Cervantes for trainer Luis Gonzalez and owner Abelardo Gonzalez. She was bred in New Mexico by R. D. Hubbard, out of Natalie Dash, by First Down Dash.

This was the first start outside of Los Alamitos for the daughter of Hes Relentless; she has two wins in her previous nine starts at Los Al.

Video replays of each trial are available on the Utah Quarter Horse Association Racing YouTube channel.