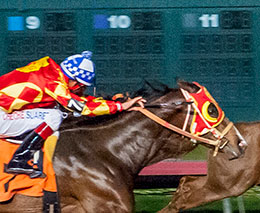 The winner of the Adequan California Derby will advance to the Grade III Adequan Derby Challenge Championship scheduled to be held at The Downs in Albuquerque later this year.

Sundays field will include Mister Tornado, a hard-knocking sprinter who put together a four-race win streak against mid to top level claimers at Los Alamitos. He finished third in a trial to the El Primero Del Año Derby before getting moved up to fifth place after disqualification in the final in which he was bumped hard at the start.

Other top runners in the Adequan California will include John Deere California Juvenile winner Giving Freely, The Plan Handicap winner Zoom On Jess and James Smith Handicap runner-up Pay Me In Front.