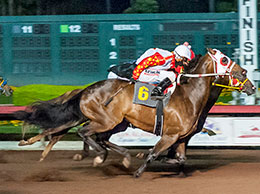 Mister Tornado Wins Adequan California Derby By A Nose
LOS ALAMITOS, CAMAY 24, 2020From the claiming ranks to the winner's circle in an AQHA Challenge stakes final, Fernando Flores' Mister Tornado has had a whirlwind of a year at Los Alamitos Race Course.

Mister Tornado reached his crescendo by finishing powerfully to score a nose victory in the $37,961 Adequan California Derby Challenge on Sunday at the Orange County oval.

The gelding by Sports Cartel was stakes hopeful at the start of the freshman campaign last year, running third in a trial to the Governor's Cup Futurity before finishing 10th in the California Breeders Freshman Stakes. After a fourth-place finish in a conditioned allowance event, his connections decided to run him for a $12,500 claiming tag.

"He's always been a hard-working horse," said trainer Felix Gonzalez. "He consistently gave an honest effort and I thought he could enjoy some success in that spot." 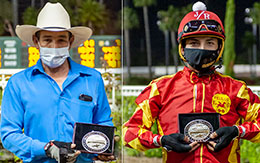 The winning connections of Mister Tornado, trainer Felix Gonzalez (left) and jockey Jonathan Roman, accept the Adequan California Derby Challenge stakes buckles on Sunday night. © Scott Martinez
Mister Tornado ran second in the claiming event, leading his connections to take a gamble with the California-bred runner and enter him against $10,000 claimers. Mister Tornado came an away an easy 1-½ length winner in that October 11th race.

Unclaimed in that event, his next race was another claiming win, this time by a head against $16,000 claimers on November 15. A second win at that level followed on December 13, this time by 3/4 lengths. His win streak reached four-in-a-row when he posted a gate to wire daylight win on February 8.

"His next effort was a third-place finish in the trials to the Grade III El Primero Del Año Derby," Gonzalez added. "That was a really nice race and he made the derby final. A few days before the El Primero, I noticed that the horse was acting very quiet, which was a bit unusual for him. He did not break in the final like he had been doing in his previous starts. He got bumped and just had a tough race in the final. We gave him some time off and I really liked the way he was coming into this race. This horse has a huge heart."

Sent off at 5-1 odds, Mister Tornado was fourth at the start, but was in the mix for a top spot shortly after leaving the gate. Ridden by Jonathan Roman, Mister Tornado moved up from third to outduel the game runner-up Zoom On Jess by a head.

"The horse responded strongly at the end," Roman said. "We were not close at the start, but he got it done late. It was an exciting race."

Mister Tornado earned $17,842 for the win to take his career bankroll to $61,155. He also improved his record to six win in 14 starts, while earning a berth to the Grade III Adequan Derby Challenge Championship to be held at The Downs in Albuquerque later this year.