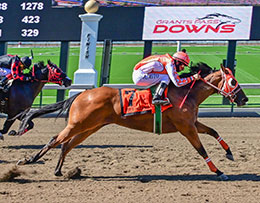 The ten fastest qualifiers will return to Grants Pass Downs on Tuesday, July 7th to vie for the winner's share of a $35,000-added purse going 400 yards. Also at stake will be an invite to the winner to compete in the $150,000-est. Grade 2 Adequan Derby Challenge Championship at The Downs at Albuquerque on October 24th.

Already a multiple stakes winner, One Flying Foose completed his 400 yard task, under jockey Jaime Lopez, in :19.593 seconds, equaling a 109 speed index. It was the seventh career win in 10 starts for the daughter of champion Foose. Trainer Freddy Ibarra conditions the bay filly for owner-breeder Matthew Huse. 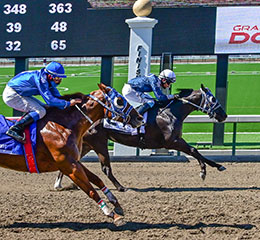 Mc Una Aguila (#2) defeats Just Watch Him (#3) in the first Adequan Derby trial at Grants Past Tuesday.
© Vince & Linda Williams
Out of the One Famous Eagle mare One Famous Strawfly, One Flyin Foose has earned $39,553 with wins in the Baxter Andruss Oregon Futurity, Far West Futurity and Prineville Quarter Horse Futurity last season.

The top four qualifiers came out of the second trial.

Mc Una Aguila defeated Just Watch Him by a head in the first trial to get the fifth fastest time of :19.952 seconds, a 99 speed index. Danny Montes saddled the daughter of world champion One Dashing Eagle to her second win in 10 starts.

Jorge Carmona owns the California bred filly out of Dlt Runaway by Spanish Boot. Jockey Jake Samuels had the riding call aboard the filly who finished third in her last start May 17th for a $12,500-tag at Los Alamitos Race Course. Jose and Gustavo De La Torre is the breeder.