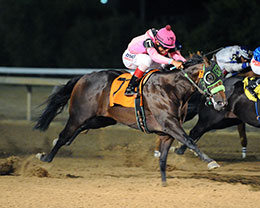 A Painted Dynasty ($3.20) was the second fastest qualifier from three trials on July 3. On Saturday, Victor Urieta, Jr. guided him home in 19.890 to earn a 96 speed index in the 400-yard Challenge regional qualifier.

The FDD Dynasty colt is trained by Alonso Neri for owner David Gutierrez. He was bred in Oklahoma by the Mixer Ranch, out of the Pyc Paint Your Wagon mare Third Painted Sign. 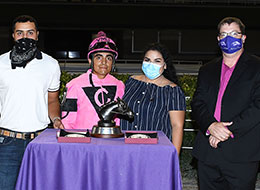 A Painted Dynasty was the post-time favorite after an impressive trial win. The stakes win was his sixth lifetime and his first in a stakes race, though he has qualified to multiple graded stakes races. Earlier this year, he qualified to the Heritage Place Derby and the Remington Park Oklahoma Bred Derby. As a 2-year-old, he was third in the Sam Houston Futurity (G2) and the Firecracker Futurity (G2) at Delta Downs. In November, he competed in the Texas Classic Futurity (G1).

Third fastest qualifier Rusty Blood Gl finished in second place with Jose Martinez aboard for trainer Angel Sanchez. He was bred in Texas by his owners, Garza Laurel Partnership, LLC, by Apollitical Blood and out of the Valiant Hero mare Dusty Rusty.

Fastest qualifier Apollitical Barbie edged away from the rest of the field to finish in third place for trainer John Stinebaugh and owner Barbara Chase. Kelsi Purcell rode the Apollitical Blood filly in both the trial and final.

Apollitical Barbie defeated Rusty Blood Gl in their trial, the first start of her 3-year-old season. She broke her maiden at Delta last spring and competed in the Louisiana Juvenile Stakes there later in the summer.

Apollitical Barbie was bred in Louisiana by Bobbi Jo Randle out of Hott Feett, by Walk Thru Fire.