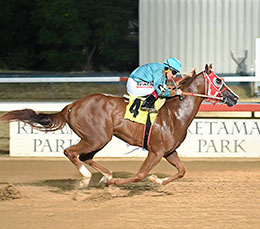 SELMA, TXJULY 25, 2020Fastest qualifier His Time to Deal won the $61,149 John Deere Retama Park Juvenile Challenge impressively on Saturday night. The race was second of three stakes on the card and the second regional Challenge qualifier.

Jose Vega rode His Time to Deal ($4.20) to a nearly 2-length victory for trainer Leon Bard. 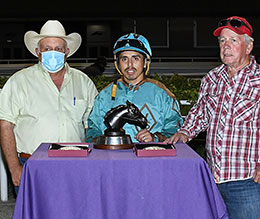 He won the first trial of three trials on July 3; the quick trial produced the overall top three fastest qualifiers. His Time to Deal is now undefeated in two career starts with earnings of $32,929.

His Time to Deal is owned and bred by Pete Scarmardo in Texas, by Dealagame and out of Lady Lilia, by First Down Dash. Lady Lilia is out of the multiple graded stakes winning mare Lady Tenaya, who won the AQHA Distaff Challenge Championship (G1) at Lone Star in 2002.

Cartel Creek was bred in Missouri by Jim Streelman and Bill Dale, sired by The Louisiana Cartel and out of the stakes winning mare Rawhide Creek, by Ivory James.

Hot Lady Returns debuted at Ruidoso before breaking her maiden in her trial for the John Deere Retama Park Juvenile Challenge.