POCATELLO, IDJULY 31, 2020Frog Nation stamped his ticket to the Challenge Championships with a win in the $53,202 Bank of America Pocatello Downs Championship Challenge on Friday night.

Frog Nation ($12.40) and Carlos Guillen Chacon were the gate-to-wire winners of the Challenge Championship qualifier with a final time of 21.348 for the 440-yard stake. The winner earned a 116 speed index in the fast final; second-place finisher Walcott earned a 113 and E Gmail picked up a 112 in third place.

Frog Nation is owned and trained by Julio Corral. The Walk Thru Fire gelding was bred in Texas by Clarence Scharbauer III, out of the Thoroughbred mare Our Girl Magic, by Belong To Me. 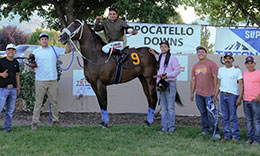 With the stakes victory, Frog Nation is three for 14 lifetime with $47,673 in earnings.

A length behind the winner, Walcott and Mauro Salcedo edged out E Gmail and Tyson Lusk for second place by a nose.

Walcott was the eighth fastest qualifier and was fifth in the same trial that produced Frog Nation. The multiple stakes winner is trained by Alejandro Chavez for owner Pedro Gutierrez Marquez.

Walcott was bred in Oklahoma by Lyle Guillory, by Tee Cos and out of Jess Maganette, by Mr Jess Perry. He has earnings of $143,063, with six wins that include the Altoona Derby at Prairie Meadows and the Mile High Derby at Arapahoe.

The accomplished 5-year-old horse has also competed in the Adequan Derby Challenge Championship (G3) at Los Alamitos, the Lovington Stakes (G2) at Zia, and most recently, the John Andreini Memorial Stakes at Ruidoso.

E Gmail was the ninth fastest qualifier to the final for owner and trainer Bob Pence. The Hawkinson gelding was bred in California by Eg High Desert Farms, out of Jess Another Ticket, by Mr Jess Perry.

As a 2-year-old, E Gmail qualified to the Bitterroot Futurity in his first career start. Since then, he has competed at Los Al as well as the Intermountain circuit. The Championship Challenge was his first placing in a stakes race, and he is four for 15 lifetime with over $20,000 earned.

Completing the field were Secret Noble, Jt Easy Bug, Kis My Bit, Wagonfullofdividends, Kool Odds and A Toast to Brindis. A Toast to Brindis originally finished sixth but was disqualified and placed ninth. Brindis Cruz was scratched.