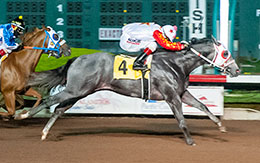 A half-sister to 2016 Champion of Champions winner Zoomin For Spuds, Apollitical Patty took her record to a perfect three-for-three following a strong second half in the first of two 350-yard trials. Bred by the late Jim Walker, the Apollitical Blood filly was bumped at the start but quickly took command on the way to a convincing win.

Ridden by Armando Cervantes, who has piloted the Idaho-bred in all three of her wins for trainer Monty Arrossa, Apollitical Patty covered the distance in :17.663. Arrossa has always given Apollitical Patty glowing reviews, singling her out as the top filly in his Los Alamitos stable.

Kr Frosty, under jockey Jesus Ayala, winning the second trial for the John Deere California Juvenile. © Scott Martinez
"She made a little mistake leaving the gate tonight, but she's been awesome in all three of her starts," Arrossa said. "She made a little bobble leaving there, but once she lined out, she ran well. It is her first time running 350 and it looked like she handled the distance well. She is a good one. I'm happy for the Walker family."

Out of the Corona Cocktail mare A Perfect Cocktail, Apollitical Patty has shown characteristics similar to her champion older brother Zoomin For Spuds.

"They are definitely a lot alike," Arrossa said. "Hot, hot in the paddock. They are smart horses, but they are pretty hot. They are pretty alert. They have a lot of the same barn mannerisms. They are good eaters. They rest nicely. They are quiet. They are really aggressive when they come to the track."

Arrossa also credited Cervantes, an up-and-coming rider at Los Alamitos, for doing an outstanding job with the star filly.

"Armando started with (Apollitical Patty) when we brought her here for qualifiers. He's working really hard. He's at the barn every single day. His hard work has paid off," Arrossa said.

Sally and Dave Kidd's KR Frosty won the second John Deere Juvenile California Challenge, crossing the wire a half-length ahead Ed Burke Million Futurity trial winner Transcendeur. KR Frosty was picking up his second straight victory at Los Alamitos. The Colorado-bred gelding by One Sweet Jess has finished in the money in all four of his career starts. Jesus Rios Ayala piloted him for trainer Jaime Gomez.

"He's a very solid horse," Gomez said. "Ayala said he didn't have to ask him for much. He should do well in the final. Monty's horse looks very tough, but it's not an impossible task. I like my horse a lot. He's improved a lot."

The Kidds and Gomez enjoyed success together in the AQHA Bank of America Challenge Championships races with the Five Bar Cartel gelding KR Hi Five. In 2018, the homebred won the Grade 2 John Deere Juvenile Challenge Championship. KR Hi Five then won the Adequan California Derby Challenge last year. "The owners are terrific people with a nice breeding program," Gomez said. "They've been a joy to train for and I'm happy for the opportunity to have KR Frosty." KR Frosty covered the 350 yards in :17.818.

For the complete list of qualifiers to the John Deere California Juvenile final to be held on Saturday, August 15 CLICK HERE.

Jet Wings One, the runner-up in the Grade 2 Robert Adair Kindergarten Futurity was scratched prior to the first race of the night.