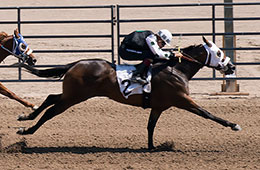 POCATELLO, IDSEPTEMBER 5, 2020 After two trials on Saturday afternoon, The Prize Ferrari was the fastest qualifier to the John Deere Pocatello Juvenile Challenge.

The Prize Ferrari ($4.60) and Jesus Canales won the first of two trials in 17.635 and earned a 95 speed index. The Mark Hanson trainee led gate-to-wire to earn his third career start. The gelded son of The Louisiana Cartel finished second in the Bitterroot Futurity (RG3) in his previous start and was second in the Crush the Curve Futurity in June.

The Prize Ferarri is owned by RTM Stables, Robin Dunn, Kevin Dunn and Byron Goody. He was bred by Weetona Stanley in Oklahoma, out of the Mr Jess Perry mare Ferarri Fast Prize, making him a half-brother to multiple grades stakes winner Ferrari James. The Prize Ferrari is three for five lifetime with earnings of $26,021, all at Pocatello Downs. 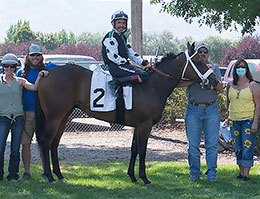 The winning connections with The Prize Ferrari after setting the fastest time in the John Deere Pocatello Juvenile Challenge trials. © Keri Crook

Summon and jockey Carlos Guillen Chacon chased The Prize Ferrari but finished a length behind as the second fastest qualifier in 17.798.

Summon is trained by Julio Corral for owner Josselin Reyes Corral. The Valiant Hero gelding was bred in Oklahoma by Reliance Ranches, LLC, out of the Corona Cartel mare Rosas Coronas.

The trial was Summons first start outside of Remington Park. He won his debut, a trial for the Oklahoma Futurity, and was fifth in both the Oklahoma Juvenile Stakes and an allowance race in May.

Sb Panama Red ($12.80) won the second trial in 17.866 to be the third fastest qualifier. SB Panama Red was ridden by Cesar Moreno for trainer Luis Gonzalez and owners Steve Berry and Jason Berry. Steve Berry also bred the gelding in Utah, by Turbulent Times and out of Southern Surfer Girl, by Southern Cartel.

Sb Panama Red broke his maiden in the trial victory, though he was third in a consolation for the Beehive Futurity at Laurel Brown and qualified to the Utah Bred Futurity at Wyoming Downs.