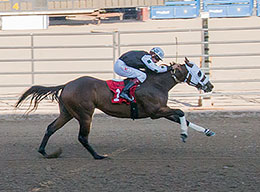 The Prize Ferarri ($3.20) was an impressive winner of the regional Juvenile qualifier. The gelding led throughout the race with a final margin of victory of a length and a quarter under jockey Jesus Canales.

The Prize Ferarri earned a 97 speed index with a time of :17.578 for 350 yards and stamped his ticket to the final in Albuquerque.

He was bred by Weetona Stanley in Oklahoma, out of the Mr Jess Perry mare Ferarri Fast Prize, making him a half-brother to multiple grades stakes winner Ferrari James. The Prize Ferarri is four for six lifetime with earnings of $46,721, all at Pocatello Downs.

In a reenactment of their trial, Summon and jockey Carlos Guillen Chacon put in a solid effort to finish in second place.

The second fastest qualifier, Summon is trained by Julio Corral for owner Josselin Reyes Corral. The Valiant Hero gelding was bred in Oklahoma by Reliance Ranches, LLC, out of the Corona Cartel mare Rosas Coronas.

Summon debuted at Remington, where he won his trial for the Oklahoma Futurity, and finished fifth in both the Oklahoma Juvenile Stakes and an allowance race in May before traveling to Pocatello.

Fortunes Wild Blood and Nakia Ramirez finished third for trainer Jay Pitcher and owners Kelly and Kyle Cook. The Apollitical Blood gelding was bred in Louisiana by Riley Blanchet, out of Cartels Fortune, by Carters Cartel.

Earlier this year, Fortunes Wild Blood won three consecutive races, including the Crush the Curve Futurity, and was fifth in the Bitterroot Futurity in July. He was third in his trial as the sixth fastest qualifier.