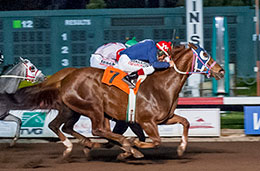 Ridden by Oscar Peinado for trainer Paul Jones, the Tac It Like A Man filly covered the 350-yard distance in :17.793 while leading the field for the Maiden Stakes on February 19. A total of 38 runners competed in the five heats with the horses with the 10 fastest times advancing to the final. Horses are eligible to enter this race if they're maidens as of December 1, 2016. 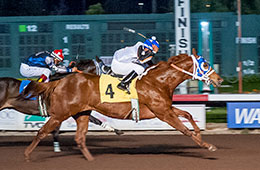 Indie Anna, under jockey Erasmo Gasca, winning the fourth trial. © Scott Martinez
All Kinds Of Kind came into the trials after breaking her maiden on December 2, one day after the deadline, and she also posted three straight runner-up efforts prior to winning for the first time.

"She's maturing," Jones said. "She's a big filly and she's starting to put things together. The number six horse in this race (Stolin Diamonds) was one of the toughest horses of the entire night and our filly didn't let him get past her. I'm really proud of this filly. She's not the fastest breaker and she's been silly in the gate early last year. She tried flipping in the gate one morning, but she's over doing things like that. She's getting better and better." 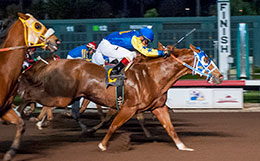 Gone Thru Fire, under G.J. Rangel, defeats Frozen Icon in the second trial. © Scott Martinez
Jones has three horses currently stabled at Los Alamitos for Double Bar S Ranch, the AQHA owners of the year in 2011 and 2006.

"I also have another one for them at the ranch (in Temecula, California)," Jones said. "It's great to see this filly do well for Double Bar S Ranch."

Andrea and Eddie Jensen's Stolin Diamond, the fifth place finisher in the Wild West Futurity last year, posted the second fastest qualifying time of :17.818 for trainer Monty Arrossa. Like All Kinds Of Kind, the Jesse James Jr gelding enjoyed his first visit to the winner's circle in his start prior to the Maiden Stakes trials. Ridden by Jesus Rios Ayala, Stolin Diamond's win came on December 4.

Owned and bred by Valley Ranch, Indie Anna posted the third fastest qualifying time :17.826 while winning for the first time in four career starts. Her trial win came in the fourth heat of the night. The Texas-bred daughter of Jess Zoomin beat PCQHRA Breeders Futurity finalist Better Check Him Out by a half-length with Erasmo Gasca piloting her for trainer Jose Flores.. 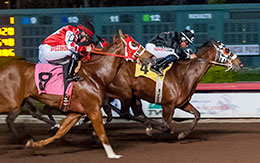 Sass Me Blue, under jockey Carlos Huerta, kicked off the opening trial over Should Win. © Scott Martinez
"We've brought this filly along slowly and in doing that Valley Farms have been supportive and very patient with me," Flores said. "They told me to take my time with her and do things as needed. Some horses need more time to mature and become better racehorses. Indie Anna has been one of those horses and I really appreciate the owner's patience."

Ed and Mary Johnson established Valley Farm in 2010, but Quarter Horses have been part of Eds life for a much longer time.

"I had the privilege of managing the great Go Man Go for three years when (AQHA Hall of Fame member) Harriett Peckham owned him," Johnson said. "Go Man Go is the best of all the great horses Ive been around."

Johnson had a St Bar filly named Choir that qualified to the 1978 Golden State Futurity at Los Alamitos.

"We flew in Jerry Nicodemus to ride her in the final," he recalled final. "We didnt win the final, but Im looking at her photo right now."

For 30 years, Ed did not own racehorses, but that love bug always remained. When the Johnsons started purchasing a few Quarter Horses a couple of years ago, they purchased their farm West of Fort Worth, Texas.

"With Frank Scoop Vessels and partners, we raced Southern California Derby winner Harems Last Dash," he said. "The collective partners sold Harems Last Dash to George and Judy Weldon, who were also partners, after his racing career. We currently have five broodmares at the farm that we breed to outside stallions. We have one baby, a filly that was recently born by Favorite Cartel out of a daughter of Babe On The Fly named Desert Passage. That makes our filly a three-quarter sister to Little Talks."

Little Talks won the Golden State Million Futurity in 2015 and the PCQHRA Breeders Derby in 2016.

"We breed and raise our babies to sell, but we ended up keeping Indie Anna so we raced her," he added. "We named Indie Anna after Indigo Illusion, who is her great-granddam on both sides of the pedigree."

A superstar in the early 1980s, AQHA Hall of Fame member Indigo Illusion earned over $867,000 on the racetrack. She won the Faberge Special Effort Futurity, Rainbow Derby and Vessels Maturity and twice participated in the Champion of Champions, finishing third and fourth in those appearances.

"(Indigo Illusion) won many stakes at Los Alamitos and other places, and was a champion," Johnson added. "Lots of Beduino in Indie Anna. Im a pedigree wonk. It may not mean anything, but were hoping it will play out."

Valley Farm will be a name to watch at Los Alamitos this fall.

"Well have some 2-year-olds at Los Alamitos this year for the trials to the Golden State Million and Los Alamitos Two Million," he added.

Lucky Seven Ranch's Sass You Blue, a half sister to AQHA champion aged mare Sass Me Blue, will also headline the Maiden Stakes after scoring a solid victory in the first trial of the night.

Sired by One Dashing Eagle and out of Jess Sass Me, Sass You Blue will be one of the finalists to race in the Maiden Stakes decider on Sunday, February 19. Ridden by Carlos Huerta for trainer Mike Casselman, Sass You Blue covered the distance in :17.88, while posting her first win in seven career starts.

"She's just starting to learn how to put her talents to work," Casselman said. "She doesn't do much wrong, but she can be laid back and pretty quiet. She is a fast filly, but we asked Carlos to get her on her toes. She's a half-sister to Sass Me Blue and that's why Lucky Seven Ranch bought her from (consignor) Lazy E Ranch. She comes from a really is a great family. Their mother, Jess Sass Me, is a nice mare and a stakes winner at Los Alamitos."