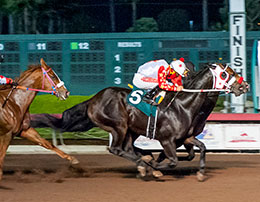 Ridden by Ruben Lozano, Staubauch led every step of the way in the 400-yard race but needed one last lunge to hold off the fast closing CM Boom Shakalaka by nose. The Texas Icon gelding was picking up his sixth win in 19 starts and first since an allowance score at Weber Downs in Odgen, Utah. Staubach, who ran in the 2018 Wild West Futurity, returned to Los Alamitos to run in the Blane Schvaneveldt Handicap. 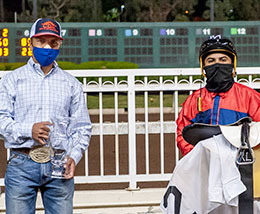 Trainer Cesar De Alba and jockey Ruben Lozano accept the John Ward Handicap stakes trophies Saturday bight at Los Alamitos Race Course. © Scott Martinez
He was a 8-1 shot in that race, but was bumped at the start and could never threatened the top three finishers, who all returned to race in the John Ward.

He drifted in the Schvanevedlt, said De Alba, who ranks 11th all-time in Quarter Horse stakes wins as a jockey. I got this horse from Jere Brinkerhoff and Jesus Canales. They did great work on this horse.

Staubach ran second to multiple stakes winner Jr Prissys Blood in the Tolltac Handicap at Laurel Brown, Utah on June 20 and has now finished in the money in 12 of 19 starts. His earnings of $8,800 in the John Ward raised his career bankroll to $33,772. Ralph and Carolyn Fales bred Staubauch.

For De Alba, the stakes victory is another steppingstone in the training career. Earlier this year, he saddled Favorite Colossus to victory in a trial to the Governors Cup Futurity, giving him his first futurity qualifier, and last year he won Thoroughbred races at Del Mar and during the Los Alamitos Summer Thoroughbred meet.

I currently have 14 horses, De Alba said. I started with two last year. I am getting some new clients. I am getting the opportunity to work with some great horses. Its been great. Staubauch covered the 400 yards in :19.943.

Schvaneveldt winner Zoom On Jess was fourth and was followed by Freight Boss and Captain Mazurk.