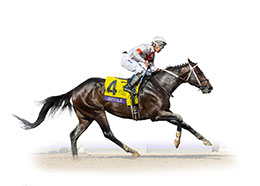 The multiple stakes winning son of Eskendereya is standing his first season at Spendthrift Farm in Lexington, Kentucky for a fee of $25,000. Frozen semen is available to Quarter Horse mares for $4,000 through Robicheaux Ranch Inc. in Breaux Bridge, Louisiana.

A marvel of consistency throughout 14 lifetime starts, Mitole never finished worse than third.

Trained by Steve Asmussen, the now 5-year-old won six of seven starts in 2019, finishing third in his only loss, the Alfred G. Vanderbilt Handicap (G1) at Saratoga Race Course after he brushed the gate in a troubled break.

Mitole kicked off his championship season in the Churchill Downs Stakes Presented by TwinSpires.com (G1), in which he scored a win by 3-½ lengths.

He stretched out in his next start to contest the Runhappy Metropolitan Handicap (G1), but the added distance proved little hindrance. After moving to the lead near the quarter pole, he drove home to cross the wire first, defeating the likes of grade 1 winner McKinzie and two-time Dubai World Cup Sponsored by Emirates Airline (G1) victor Thunder Snow.

Mitole bounced back after his Vanderbilt loss to win the Forego Stakes Presented by Encore Boston Harbor (G1) and the Breeders Cup Sprint, which proved to be his crowning glory. Dueling in the Santa Anita Park stretch with Shancelot, Mitole propelled himself to a 1-¼ length victory in 1:09 flat.

Asmussen said of Mitole, "The fastest horse I've ever trained."

"Corinne and I consider ourselves the most fortunate people in the world to have been able to have owned a horse like this," Heiligbrodt said. "And it just comes around never. So thats the way we think about it."