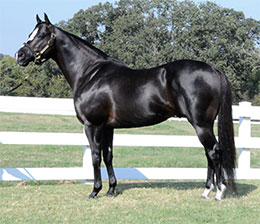 Pyc Paint Your Wagon, who entered this year as the breed's No. 1 sire of money earners standing to the public, was laid to rest earlier today at Lazy E Ranch in Guthrie, Oklahoma.

Lazy E's Butch Wise said that the 17-year-old brown stallion was taken to Oklahoma State University in nearby Stillwater earlier in the week after showing signs of illness. On Tuesday veterinarians at OSU determined that the three-time Grade I winner and sire of earners of more than $35 million had cancer.

Pyc Paint Your Wagon moved to Lazy E just prior to the 2014 breeding season when Reliance Ranches became Pohl's partner in the stallion that is now the No. 1 siring son of Corona Cartel.

On the day of the passing of Pyc Paint Your Wagon, stallion manager Butch Wise had this to say: "Class is the word that defined Pyc Paint Your Wagon. He was a first class racehorse at two and three and becomes a sire of the very highest class. But for those of us that were fortunate to be around him every day his class was exhibited by his wonderful disposition and willing temperament that he passed on to his very successful offspring.

"He was such a 'class' horse to be around that he made you truly appreciate what a tremendous presence he possessed. 'Pyc' made a huge impact on our breed, and we are grateful to have had the opportunity to be associated with such a giant of our industry. There is no way to properly describe the loss that staff at Lazy E feels at his sudden passing. Our deepest sympathy goes out to owners Michael Pohl and Gary and Micah McKinney at this time.

Pyc Paint Your Wagon broke on top as the No. 1 Freshman Sire of Money Earners at $1.5 million in 2010 and never looked back.

Pyc Paint Your Wagon has sired 111 stakes winners and 107 stakes placed winners with a remarkable 20% of his starters earning blacktype. He was the Leading Sire in the Nation in 2012 and the No. 2 Leading Sire in 2013 and 2014.

Pyc Paint Your Wagon has made his mark as a significant broodmare sire as his daughters have already produced such runners as Grade I winners First Valiant Sign $1,053,833, 2019 Champion Two-Year-Old Gelding Trump My Record $791,153 and A Tres Of Paint $509,184. A leading maternal grandsire already, his daughters had earners of $3.3 million in 2019 with more than $2 million of that coming from two-year-old runners.