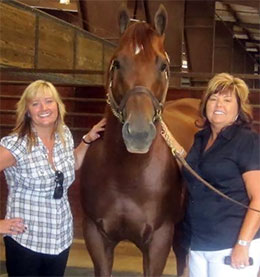 "Completely heartbroken to hear the news of Tac It Like A Man passing," Dawn and Rhonda Rae List of Double Bar S Ranch said in a post today.

Bred and raced by Double Bar S Ranch, Tac It Like A Man won or placed in eight of 12 career starts at 2 and 3 earning $413,563. Besides winning the two aforementioned Grade 1 futurities at Los Alamitos Race Course he was also a finalist in the Ed Burke Million Futurity(G1) and the Southern California Derby(G1).

Tac It Like A Man stood most his career in the US at Lazy E Ranch in Guthrie, Oklahoma and a short time at Zerlotti Genetics Ltd. in Pleasanton, Texas before going to Brazil in 2017. 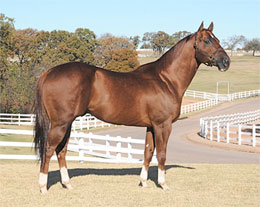 Grade 1 winner and sire Tac It Like A Man died June 21st in Brazil. © Lazy E Ranch
From 10 crops to reach racing age, the son of all-time leading sire First Down Dash sired 191 winners, 49 stakes horses (15%), earners in excess of $5.5 million with average earnings per starter over $17,700.