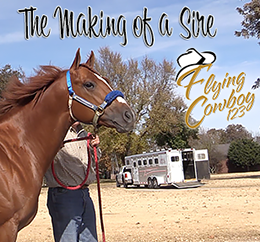 The son of leading sire Apollitical Jess concluded his first year at stud duty at Bob Moore Farms in Norman, Oklahoma for the 2020 breeding season to a full-book of mares.

The short film, written and produced by Greg Thompson of StallioneSearch.com, chronicles the top sire prospect for 2020 who was retired from his race career following a win in the Grade 1 Texas Classic Derby, as well as garnering another his second AQHA championship honor of AQHA Racing Champion 3-Year-Old Colt.

The millionaire joined a stout roster of stallions at Bob Moore Farms, which includes the #1 second-crop sire for 2020, Hes Relentless, world champion sire FDD Dynasty, as well as the G1 placed Docs Best Card, who is currently the #3 first-crop sire of money earners.

The multi-part video series explores Flying Cowboy 123 from his racing career to his entrance into a stud career, including interviews with all of the connections that oversaw his million-dollar earning career.

CLICK HERE to view Episode 7 of The Making Of A Sire: Flying Cowboy 123.

This marks the fifth occasion that a sire has been selected to be spotlighted within the Making Of A Sire Series on StallioneSearch.com.

The first Making Of A Sire films spotlighted the sire Kiss My Hocks as he transitioned from race career to stud career. The following year in 2016, the All American Futurity(G1) winner and champion Jess Good Candy was the subject of the second edition of the film series. The next edition of the series focused on the All American Futurity(G1) winning and AQHA World Champion One Dashing Eagle was the spotlight stallion, and the two-time AQHA Racing Champion Kvn Corona was the spotlight in the 2019 series .

The short-film is a paid advertisement by the connections of Flying Cowboy 123. The winner of both the Texas Classic Futurity(G1) and Texas Classic Derby(G1) whom retired to stud career with earnings of $1,045,811. He was named AQHA Racing Champion 2-Year Old Colt in 2018 and Champion 3-Year-Old Colt in 2019.