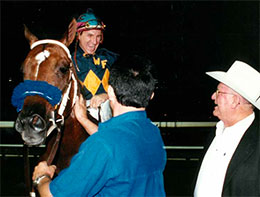 He was bred by Ellen Kennedy and was purchased as a yearling by AQHA past president Walter Fletcher of Lakin, Kansas. When "Ramblin Man" retired from racing, he spent the remainder of his life at the Fletchers ranch, grazing with his companion horse and being spoiled by the family.

The chestnut gelding was sired by Takin On The Cash and out of the Kiptys Charger mare Kiptys Kisses.

The perpetual fan favorite raced 51 times over the course of six years. He would win 16 career starts, with 13 seconds, four thirds and earned $750,907.

His career began with a fifth-place finish in the 1995 Oklahoma Futurity (G1), followed by runner-up finishes in the Remington Park Futurity (G1) and Kansas Jackpot Futurity (G1). He closed that year with a victory in the Juvenile Challenge Championship (G1).

The following year he would again win the Los Alamitos Invitational Championship (G1) and light the board in the Grade 1 Go Man Go and Remington Park Championship.

In his final two seasons, he lit the board in the Grade 1 Go Man Go Handicap and Remington Park Championship, and won the Two Rivers Stakes (G3).

"Ramblin Man meant so much to us and our family," Pat Fletcher said. "It wasnt the fame and the money, it was the joy he brought all of us. The kids loved him, everyone loved him and we miss him."