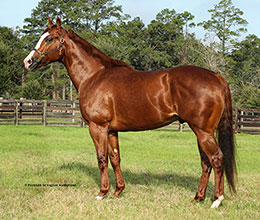 Stakes Winner I See Visions to BC Quarter Horse Farms In 2021
OPELOUSAS, LANOVEMBER 20, 2020BC Quarter Horse Farms LLC announced today they have purchased I See Visions, a stakes winning son of leading sire One Famous Eagle, and he will stand the 2021 season at their facility in Lake Charles, Louisiana. His fee will be $1,250. Breeders who book by February 21st can breed for $750.

I See Visions won or placed in 11 races while earning $85,142. He won the South Florida Invitational and was third in the Evangeline Downs Derby. He was also a finalist in the Miss Polly Classic[G3], Hialeah Derby, Evangeline Downs Futurity, Sawgrass Stakes and Orange Blossom Stakes.

Fly The Eagle, a stakes qualifying son of I See Visions, winning at Delta Downs. © Coady Photography
From limited starters in three crops to race, I See Visions has sired five winners from nine starters and average earnings per starter of more than $8,200.

I See Visions' sire, AQHA Racing Champion and AQHA Racing World Champion sire One Famous Eagle, is the sire of 67 stakes winners, 7 champions with earnings in excess of $31.4 million.

For additional information or breeding contracts call Butch Quiroz at (337) 884-6918.