© Alejandra Carrion
Early Bookings Discounts Available To Champion Ec Jet One
WHEELOCK, TXDECEMBER 16, 2020Granada Farms announced this week they will offer a number of early booking discounts to their two-time champion stallion Ec Jet One, who's 2021 fee is $5,000.

From a limited number of starters in his first crop to race, Ec Jet One is the sire of eight winners, 1 black type and 5 stakes finalists. He is the No. 6 Leading First Crop sire of Money Earners in 2020. 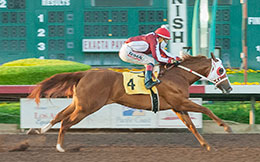 Bred-and-owned by Enrique Carrion, Ec Jet One won eight of 10 career starts while earning $1,370,85. Named the 2016 AQA Racing Champion 3-Year-Old and 3-Year-Old Colt, he won the All American Derby(G1), Hialeah Derby, South Florida Derby, was third in the Sam Houston Futurity(G2) and a finalist in the Texas Classic Futurity(G1).