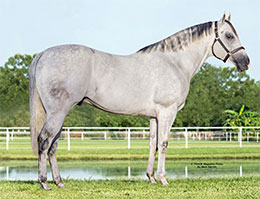 Conditioned by trainer Jaime Gomez, the 3-year-old gelding has won five of nine career starts and earned $536,126. He was also second in the Los Alamitos Two Million Futurity(G1) and a finalist in the $3 million All American Futurity(G1) last season. 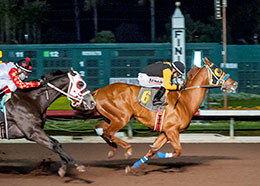 From only 19 starters in his first crop, Moonin The Eagle was the #3 Leading First-Crop Sire of Money Earners. He has sired 9 winners, 3 stakes horses, earners of more than $752,000 with average earnings per starter in excess of $39,500.

Moonin The Eagle won or placed in 10 of 14 career starts while earning $548,985. He won the Remington Park Invitational Championship(G1), Hialeah Maturity, South Florida Derby and Sam Abbey Memorial and was second in the Refrigerator Handicap(G1) and Hialeah Derby. He was also a finalist in the Grade Rainbow Derby and Grade. Sam Houston Derby.

Moonin The Eagle stands at Cox Stallion Station in Kaplan, Louisiana for a fee was $5,000. For additional information for breeding contracts for 2021 call Jerome Bellard at 337-643-3255.