Tdz Rolex Rattler Tops Night One of LQHBA Louisiana Million Futurity Trials
OPELOUSAS, LANOVEMBER 20, 2020Coming off a fifth-place effort in the LQHBA Sale Futurity(RG1) in his last start, Tdz Rolex Rattler ran the biggest race of his career Friday night to the set the fastest qualifying time on the first of two nights of trials for the LQHBA Louisiana Million Futurity(RG1) at Evangeline Downs.

The 10 fastest qualifiers, five from each night of trials, will return to EVD on December 19th to vie for the winner's share of the $1,000,000 purse, the second of two million-dollar races for state-bred 2-year-olds in Louisiana.

Under jockey Jorge Linares, Tdz Rolex Rattler defeated Fast Dashin Diamond by a nose in the last of seven trial races to set the top mark of :19.772 seconds, equaling a 92 speed index with a 3 mph crosswind. The top three finishers in the final trial recorded the top three qualifying times.

"This horse has impressed me since he was a baby; he has run well in each of his starts, but tonight was his best race," Valdez, Jr. said following the win. "We rested him after Delta Downs and his trial for the LQHBA Sale Futurity was his first race back. Our horse is not that big and (Jockey) Jorge Linares told me wasn't sure he could get 400 yards, but he showed us what he could do in this trial." 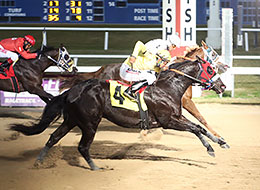 Third fastest qualifier, RG1 winner San Lorenzo, finished a head back in the final trial to clock in at :19.793 seconds for owner Rogelio Marquez, Jr. Trainer Hector Alcala saddled the Coronas Leaving You colt in his first start since winning the $1,025,782 Lee Berwick Futurity(RG1) on August 22nd.

Jim and Natalie Montgomery bred the brother to champion Open Me A Corona from the Mr Eye Opener mare In The Open. David Alvarez rode the $68,000 LQHBA Yearling Sale repurchase who has won three of five starts and earned $548,340 this season.

Ho Lotta Patriot and Black Blood dead-heated in the third trial to tie for the final two spots with a :19.824 clocking, equaling a 91 speed index with a 4 mph crosswind.

The son of a leading second-crop sire Apollitical Blood qualified for the RG2 Laddie Futurity in July and has won three consecutive races including his trial for the Lee Berwick Futurity(RG1). Erin Chrisman bred Black Blood from the Sweet First Down mare Black Rosalita.

The final seven LQHBA Louisiana Million Futurity(RG1) trials will be contested on Saturday's EVD race card as races 2 thru 8. In addition the track will host the $35,000 Opelousas Stakes as Race 1 and the LQHBA Breeders' Derby trials, races 9 thru 11. First post is 5:50 (CST).

For more information on the American Quarter Horse season at Evangeline Downs, visit the track's website at evdracing.com. Evangeline Downs' Twitter handle is @EVDRacing and the racetrack is also accessible on Facebook at www.facebook.com/EvangelineDownsRacing.