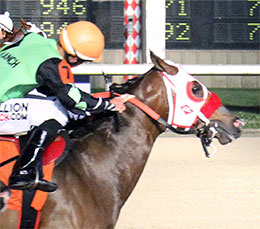 TDZ Jet Black Down will be stretching out in distance off of his head victory in the 330-yard, $369,405 Louisiana Breeders Laddie Futurity (RG2) on May 18. Kenneth Roberts Sr. trains the homebred Jet Black Patriot gelding for owner Tony Doughtie.

TDZ Jet Black Down drew post 8 and will be ridden by John Hamilton in the 10th heat.

HH Gailforce is trained by Joel Cantu for the Egoizzta Partnership. A bay daughter of Freighttrain B, the filly has earned $171,979 from four outs, and her three wins include a neck victory in the March 16, $305,296 Mardi Gras Futurity (RG2) at Louisiana Downs.

Other prominent state-bred juveniles entered in Saturdays trials include Ed O, a gelded son of Mr Piloto who is coming off of a second-place finish to TDZ Jet Black Down in the Laddie Futurity. Jose U. Lopez trains Ed O for owner Edwardo Lopez.

Ed O drew post 4 and will be ridden by Noe Villatoro in the 13th trial.

The 10 fastest qualifiers from Saturdays Lee Berwick Futurity trials will meet in the July 6, $200,000-added final.

The Lee Berwick Futurity trials, and all Delta Downs races, can be seen at Q-RacingVideo.com.