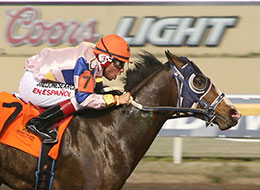 Will Rogers To Open 2019 QH Meet Saturday, Lota Shakin Goin On Heads 8 Black Gold 350 Trials
CLAREMORE, OKSEPTEMBER 5, 2019Will Rogers Downs in Claremore, Oklahoma will kick off their 2019 live Quarter Horse meet on Saturday with a card that includes trials for the $252,876 Black Gold 350 Championship Futurity. Another $13,309 will be paid out in stallion awards.

The 10 fastest qualifiers, from the 85 two-year-olds set to contest the eight trials races, will return to Will Rogers Downs on Sunday, September 22nd to compete in the final.

Lota Shakin Goin On, a runner-up in the $895,210 Remington Park Futurity(RG2) in April, has returned from Ruidoso to head the sixth trial (race 8) for owners Gerald Reed and Whiting Ranch.

Also trained by Reed, the son of leading third-crop sire Lota Pyc has compiled a (4) 1-1-0 record this season and banked $149,524. He enters off a sixth place effort in the All American Futurity(G1) trials to eventual runner-up and fastest qualifier Mister Riptide.

Lota Shakin Goin On will face a well-rested Dyna Story who was seventh in the FL Lady Bug Stakes on May 27th in her last start. Eddie D. Willis trains the homebred daughter of world champion sire FDD Dynasty for owner-breeder James Sills.

The lightly raced son of first-crop sire Wagon Tales broke his maiden at Remington Park in April and has compiled a (3) 1-2-0 record. Justine Klaiber has the riding call from post 5 in the seventh trial.

Willis will also saddle $100,000 Rainbow Juvenile third-place finisher Shannon Power from post 1 in the fifth trial (race 7). Jimmy D. Brooks has been named aboard the Larry Rice owned daughter of leading first-crop sire Hes Relentless. Winless in seven starts, the chestnut filly was also a finalist in the Heritage Place Juvenile and has banked $27,967 this year.

Willis and Brooks team in the fourth trial (race 6) with Abel Flores' Cajun King, a finalist in the Heritage Place Juvenile at Remington Park in his last out. The son of champion sire The Louisiana Cartel will also be looking to break his maiden in his fourth career start.

Trainer Luis Villafranco will saddle Ellen Kennedy Racing LLC's homebred Jess Vamoose in the fourth trial from post 1. Gonzalo Gutierrez has been named to ride the Mighty B Valliant gelding who won his Heritage Place Futurity trial and was fifth in the Easy Jet Stakes this season.

Df Royal Tales, runner-up in the Fair Meadows Juvenile in his last start, will race in the second trial (race 4) for owner Jenaro Robles-Mejia and trainer Carlos Ruiz. Mario Delgado has been tapped to ride the Wagon Tales gelding from post 7.

G.R. and Shaena Carter, Jr.'s Will B Valiant will start from post 9 in the opening trial (race 3). Cody Smith has been named by trainer Clinton Crawford to ride the Mighty B Valiant gelding who has qualified for the John Deere Ruidoso Downs Juvenile Challenge(G3) and the Remington Park Juvenile in four starts this season.

For a complete list of Will Rogers Downs Saturday entries, including the Black Gold 350 Championship Futurity trials, on Equibase CLICK HERE.

All Will Rogers Downs races can be seen at Q-RacingVideo.com.