Picov Derby Trials highlight Monday racing at Ajax Downs
Shes Sizzling (6) and Shake It Twice (7) meet in one of two trials this Monday for the important Picov Derby. 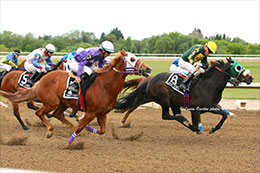 Monday is also the final installment of "10 Days of Winning" which gives on-track fans a chance to win one of four $50 betting vouchers and a spot in the rich final on Oct. 14.

Two 400-yard trials for the Picov Derby will be contested Monday with the 10 fastest qualifiers advancing to the Sept. 23 final.

Spy For The Senate tops the first trial which goes as race 2. Owned by Milena Kwiecien of Burlington and trained by Pontypool's Jason Pascoe, the track's leading trainer, Spy for the Senate won his return to Ajax Downs on Aug. 18 after a U.S. campaign.

Two very good fillies headline the second trial, race 3. Shes Sizzling, winner of the Ontario-Bred Derby in June, is back from Indiana where she was a stakes trial winner. She is owned by Erik and Joyce Lehtinen of Uxbridge.

She meets her arch rival Shake It Twice, who won the Ontario Sires Derby in her most recent start and has won three straight races. She is owned and trained by Chantelle Bourgeois of Enniskillen.

Ajax Downs has its largest card this Monday with 10 races and a first race post time of 12:55 p.m.