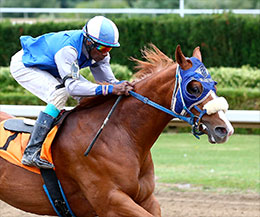 Six of the entrants are Ontario-bred including the undefeated Eazy Street who has breezed to three consecutive wins to begin his career including a victory in his Trial, Sept. 16, for the $68,300 Futurity final at 400 yards.

Owned by Carol and Jaime Robertson of Hillsburgh, ON and bred by Guylaine Paquin, the flashy sorrel-coloured gelding posted the fastest time of all qualifiers for the final when he won his Trial by 1 3/4 lengths in :20.38 under leading rider Tony Phillips.

Eazy Street is trained by Bryn Robertson and will start from post position four.

Ivy Lane Racing's homebred Rowdy And Bodacious won the first Trial for the Alex Picov Futurity with a time of :20.66 for trainer Scott Reid of Bowmanville. The Ontario-bred has improved with each race and Cassandra Jeschke will ride him from post two.

Two-time winner A Lone Hand, owned by Cameron, ON's James Bogar has two wins and second place finishes in the Ontario-Sired Futurity and to Rowdy and Bodacious in the Trial. He will be irdden by Brian Bell from post three.

The Alex Picov Memorial Futurity is race 7 on an impressive 10-race card at Ajax Downs with a first race post time of 12:55 p.m. (EDT).