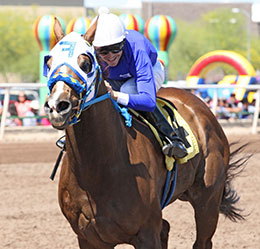 Owned by Carolyn and Ralph Fales, Mickey Ward's last two starts have been at 550 yards with his most recent outing resulting in a 3/4 length victory in a good time of :27.25. The 8-year-old Arizona-bred has won eight of 23 career starts with his most famous victory coming in the Grade 1 Cox Ranch Distance Challenge at 870 yards here last year.

Named after the champion boxer, Mickey Ward will be looking to pack a big punch in the second half of the Scott Lewis. He is by champion and world champion sire FDD Dynasty.

Paul Jones and Thompson Racing, Inc's Ballast Point is five years younger than Mickey Ward and figures to have an advantage out of the gate. He was blazing fast in his last start - a four length victory at 870 yards - as he flew to five length lead shortly after the start. He was second to stakes winner Well Good in the California Breeders 550-Yard Stakes on July 27.