It's A Super Showdown In Million Dollar Derby Sunday At Los Alamitos
Superstars Flash And Roll and Powerful Favorite will face off in the Grade 1, $1,009,650 Los Alamitos Super Derby at Los Alamitos Race Course Sunday night. 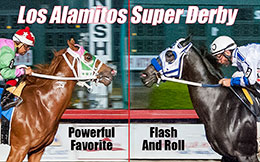 It's A Super Showdown In Million Dollar Derby Sunday At Los Alamitos
LOS ALAMITOS, CANOVEMBER 8, 2019The anticipated showdown between superstars Flash And Roll and Powerful Favorite will highlight the premier race for 3-year-olds of the meet, the Grade 1, $1,009,650 Los Alamitos Super Derby at 400 yards on Sunday night. Eight races are on tap with first post set for approximately 5:25 p.m. (PST).

Ten outstanding sophomores will be in action in the Super Derby, which is scheduled as the eighth race on the card. The Super Derby winner a first place check of $424,053 plus a provisional berth to the Grade 1, $600,000 Champion of Champions on Dec. 14."

It's truly a showdown between AQHA champion Flash And Roll and Powerful Favorite. Owned by Scott Bryant and trained by Justin Joiner, Flash And Roll dominated the second half of the season last year Los Alamitos, as she won both the Grade 1 Los Alamitos Two Million Futurity and Grade 1 Golden State Million Futurity. The First Moonflash filly went over $1.2 million in earnings in the process while being named AQHA champion 2-year-old and champion 2-year-old filly.

In her first start here of 2019, Flash And Roll continued to shine at the Orange County oval, as she posted the fastest qualifying time to the Super Derby. Now unbeaten in her five starts at Los Alamitos, Flash And Roll looks to become the first horse to win the Two Million, Golden State Million and Super Derby. Julianna Hawn Holt bred the winner of nine of 12 career starts. Cody Jensen will pilot the California-bred from post five.

Rosenthal Ranch's Powerful Favorite, who is a perfect seven for seven in 2019, has been the top 3-year-old all year long at Los Alamitos. Ridden by Eduardo Nicasio for trainer Chris O'Dell, the gelded son of leading sire Favorite Cartel has already won three derbies this season. He began with the Grade 1 Los Alamitos Winter Derby on February 9 and then followed it with the Grade 3 El Primero Del Año Derby on March 31 and the Governor's Cup Derby on July 27.

A Super Derby victory would tie him with the great Moonist as the only horses to win four derbies at Los Alamitos. If Powerful Favorite can remain unbeaten through eight starts, it would equal Dashing Folly's memorable 1996 Los Alamitos campaign when she went a perfect eight for eight locally (she was also unbeaten in two starts at Manor Downs earlier that year) in route to being named AQHA World Champion, champion 3-year-old and champion 3-year-old filly.

Powerful Favorite, who would also go over the $1 million mark in earnings with this win, will start from post number seven. His younger brother, Runforyourlife, won the $1,072,850 Golden State Million Futurity, last Sunday night.

Martha Wells' Red Hawk Cartel, who finished third in the Winter Derby earlier this year, and the Jaime Gomez-trained duo on Ali Babe Foose and Dexxter are among the other talented runners.