Earle Gray Among Top 870 Runners In Action On Friday Night
Earle Gray will look to continue his fine form when he headlines the fourth race, a key allowance event at 870 yards on Friday night at Los Alamitos. 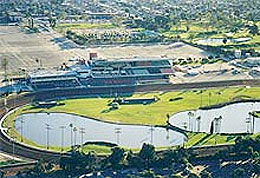 Earle Gray Among Top 870 Runners In Action On Friday Night
LOS ALAMITOS, CAMARCH 19, 2020, 2020Robert Lucas Earle Gray will look to continue his fine form when he headlines the fourth race, a key allowance event at 870 yards on Friday night at Los Alamitos. Seven races are on tap with first post scheduled for 6 p.m. The racing action is being held behind closed doors at Los Alamitos with no spectators allowed inside the facility.

Earle Gray has finished third or better in all six of his career starts with his last outing being the most impressive. With Edgar Payeras going with Mr. Esken in this race, Jose Dominguez will be aboard Earl Gray, who is a gray gelding by Marino Marini.

In his last start, Earle Gray posted a 3 3/4 length win over the usually sharp El Senor De Latuna on February 28 while racing for an $8,000 claiming tag. Prior to that effort, he finishing second against $6,250 foes.

Earle Gray steady performances have helped Lucas to the top of the mixed breed trainer standings at Los Alamitos. The conditioner has won three races from just six starts. Payeras, meanwhile, is second in this category with seven victories from 24 mounts. Hes second behind Ramon Guce, who has eight victories.

E Bradley Cooper, who has finished in the top three in nine straight races, including a couple of runner-up efforts against allowances rivals at this level, figures to be the main threat to Earle Gray.

The racing program will feature three other events at 870 yards with an allowance event featuring Chico Baby and recent maiden winners Seeking Peace and Brain Game slated as the second race on the card.

Owned by Grant Paulson and trained by Brian Pitnick, Chico Baby has enjoyed consistent efforts over this oval, including a runaway maiden win and three in-the-money finishes against allowance competition.