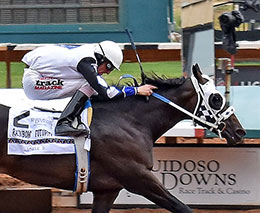 Uncle D will be making his first official start since September 2, when the Corona Cartel colt scored a neck victory as the 6-5 favorite in the 440-yard, $200,000 All American Juvenile Stakes at Ruidoso Downs. Uncle D is coming off of a juvenile campaign during which he earned $682,965 from six outs in New Mexico and Oklahoma and won the 400-yard, $1-million Rainbow Futurity (G1).

Uncle D drew post 9 and will be ridden by Cody Smith in the third of 11 trials.

Other prominent sophomores entered in Sundays trials, which begin at 1 p.m. (MDT), including Aggressive Driver and Determined One. A sorrel son of champion Mr Jess Perry, Aggressive Driver is coming off of a victory in the March 7, $184,000 West Texas Derby (G2) at Sunland Park. The California-bred gelding drew post 3 and will be ridden by Ricky Ramirez for owners Ricardo A. Bernal and Reymundo Resendez and trainer Blane Wood in the first trial.

Determined One will be making his 3-year-old debut off of a 2-year-old season during which he banked $338,945 from six starts and ran third, a neck behind winner Mr Jess Jenkins, in the 440-yard, $3-million All American Futurity (G1). The Hes Relentless gelding was also a finalist in the 350-yard, $1.07-million Ed Burke Million Futurity (G1) at Los Alamitos.

Determined One drew post 10 and will be ridden by Raul Ramirez Jr. for owners Joan Dale Hubbard and Shaun Hubbard and trainer Todd Fincher.

All Ruidoso Downs races can be seen at Q-RacingVideo.com.