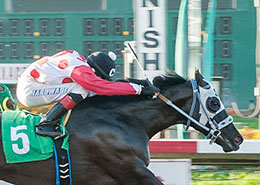 Two Million Futurity Runner-Up Makes Sophomore Debut In Vandys Flash Handicap
LOS ALAMITOS, CAJUNE 28, 2020Link Newcombs Cattail Cove will return to action for the first time since running second in the Grade 1, $1.9 million Los Alamitos Two Million Futurity on December 15 when he leads a field of seven in the $25,000 Vandys Flash Handicap on Sunday at 400 yards.

Cattail Cove had a highly productive freshman campaign, as the gelding won three of seven starts while also running third in the Governors Cup Futurity. Trained by Juan Aleman, the Favorite Cartel gelding worked 220 yards in :12.40 in preparation for this race on June 13. He could be a medium price on the tote board, as hell face 2020 stakes winners John Carter Cash and Up And Coming.

Juan Ramos John Carter Cash will be one of the favorites in the Vandys Flash after scoring a length victory in the Dillingham Handicap on May 16. The son of Carters Cartel flew out of the gate from post four and relished the 400-yard distance from there fourth career victory.

Hell start from that same post position number four this Sunday and hell be unbeatable if he repeats his Dillingham effort.

The Chris ODell-trained Up And Coming is the other top contender following his third place finish in the Dillingham and his solid third to first comeback victory in the James Smith Handicap on April 15. He also raced in the Two Million last year, running ninth to champion Cartel Jess Rockin on that night.