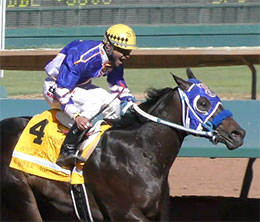 Fifteen heats will be contested on Friday and Saturday, beginning at noon MDT each day. The five fastest qualifiers from each day will meet in the July 19, $1-million Rainbow Futurity final

Cyber Monday drew Post 2 and will be ridden by Sergio Becerra Jr. in Friday's first heat. Trained by Sergio Ibarra for owners L O S LLC and Abelardo F. Gallegos, Cyber Monday is a California-bred colt by leading sire Favorite Cartel who is coming off of a half-length victory at odds of 10-1 in the 350-yard, $1-million Ruidoso Futurity (G1) on June 7 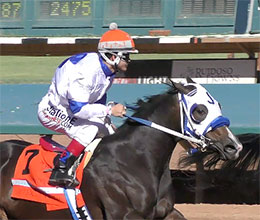 Misscandymountain was runner-up to Cyber Monday in the $1-million Ruidoso Futurity(G1) in her last start.
© StallioneSearch / Greg Thompson
Misscandymountain, the runner-up to Cyber Monday in the Ruidoso Futurity, drew Post 7 and will be ridden by Noe Garcia Jr. in Friday's fourth trial. Mike Joiner trains the homebred daughter of #2 first-crop sire Jess Good Candy filly for owner Wootan Racing

Other prominent entries in Friday's trials include Dalts Fancy Pistol, a stakes-winning daughter of third-crop sire Im A Fancy Pyc. Trained by Guillermo Valdivia for owners Don Anthony and Sam W. Green, Dalts Fancy Pistol will be stretching out in distance off of her half-length victory in the 330-yard, $50,000 FL Lady Bug Stakes (RG3) for Oklahoma-bred 2-year-olds at Remington Park on May 25 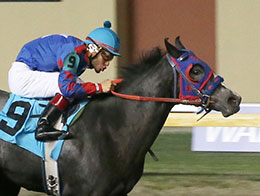 FL Lady Bug Stakes(RG3) winner Dalts Fancy Pistol will step up to the 400 yard distance in Friday's trials.
© Duston Orona photography
Dalts Fancy Pistol has won three of four starts and has banked $87,100, and she was a finalist in the April 18, 330-yard Remington Park Futurity (RG1). The filly drew Post 8 and will be ridden by Rolando Raudales in the eighth heat

Shott Gun heads the 2-year-olds entered in Saturday's Rainbow Futurity trials. A homebred son of Valiant Hero campaigned by Bobby D. Cox, the gelding is coming off of a heads victory at odds of 17-1 in the 350-yard, $826,000 Heritage Place Futurity (G1) at Remington Park on May 30. 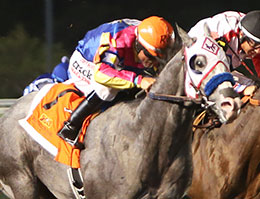 Trainer John Buchanan will send out another Cox homebred, Jettz, in Saturday's third heat. Jettz will be stretching out in distance off of his third-place finish in the Ruidoso Futurity.

Jettz has won one of four outs and has earned $168,834, and the son of leading first-crop sire One Fabulous Eagle gelding was a finalist in the Remington Park Futurity. Jettz drew Post 7 and will be ridden by Francisco Calderon.

Whitmire Ranch's Whistle Stop Cafe, an undefeated daughter of multiple stakes sire Freighttrain B trained by Blane Wood, drew the rail post and will be ridden by Ricky Ramirez in the fifth trial. A $42,000 buy at last year's Heritage Place Yearling Sale, the gray filly has won both of her outs -- including the May 30, $100,000 Heritage Place Juvenile Stakes on Remington Park.