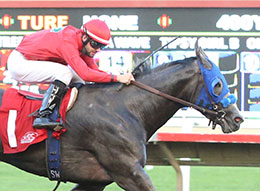 SHAKOPEE, MNJULY 27, 2020Zoomn On Bye, a gray son of the Shazoom stallion Mezoomn campaigned by B. Thomas Pick, is one of 17 sophomores entered in Tuesdays 400-yard Canterbury Park Derby trials at Canterbury Park.

Zoomn On Bye drew post 3 and will be ridden by Marcus Swiontek for trainer Cory Rumsey in the second of two trials.

The 10 fastest qualifiers will meet in the $75,000-est. Canterbury Park Derby final on August 11.

Spencer Cordes Jess One Lane, a stakes-placed son of One Sweet Jess trained by Victor Hanson, is coming off of a third-place finish, three-quarters of a length behind winner Relentless Seis, in the 350-yard, $67,000 Minnesota QHRA Futurity (R) for state-bred juveniles on July 7. The colt has earned $10,074 from three races.

Jess One Lane drew post 2 and will be ridden by Ismael Suarez Ricardo in the second heat.

All Canterbury Park races can be seen at Q-RacingVideo.com.