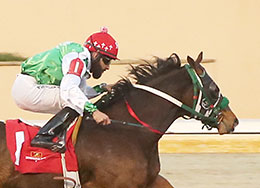 Buford T is coming off of a Remington Park spring campaign during which the Oklahoma-bred gelding earned $20,561 from four races and ran second, a neck behind winner Our Secret Weapon, in the 300-yard, $50,000 Oklahoma Juvenile Stakes on March 21.

Buford T drew post 6 and will be ridden by Jose Vega for trainer Oscar Nunez in the third of five trials.

Gael Force, a stakes placed Im A Fancy Pyc colt trained by Manuel Vega Jr. for owner Circle T Ranch, drew the rail post and will be ridden by Cipriano Vidana in the fourth heat.

Gael Force is coming off of a second-place finish, a half of a length behind winner Dalts Fancy Pistol, in the May 25, 330-yard FL Lady Bug Stakes (R) at Remington Park, and he was a finalist in the April 18, 330-yard Remington Park Futurity (RG1) for Oklahoma-breds.

The 10 fastest qualifiers will meet in the Gillespie County Fair Futurity on August 23.