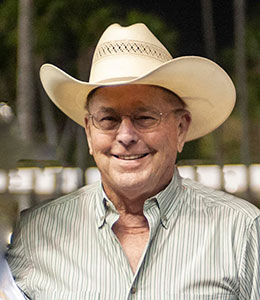 Nichols Has One To Watch On Friday Night; First Post 6:40 P.M. (PDT)
LOS ALAMITOS, CAAUGUST 7, 2020Longtime Quarter Horse racing owner and breeder Howard Nichols has campaigned some outstanding runners over the past 10 years at Los Alamitos.

Nichols was also part of the ownership that won the richest race ever held here - the $2,236,300 Los Alamitos Two Million with I Like The Odds in 2011.

Nichols remains a major part of racing at the Orange County oval and several of his horses have recently reached the Los Alamitos winners circle. They include Long Time Favorite, who qualified to the August 16 Golden State Derby after winning his trial last Sunday night, and Thin Lizzey, who scored her maiden victory on July 26.

Nichols hopes for another good effort from one of his runners here on Friday, as the 5-2 choice Watch Over Bella is among the top contenders in the featured $11,325 allowance event for 2-year-olds in the sixth of seven races on Friday. First post time is 6:40 p.m. (PDT).

Purchased for $93,000 at Ruidoso Sale, Watch Over Bella was outstanding in morning gate works at Los Alamitos and has put together three solid starts to begin his career. He was third in his trial to the Grade 1 Ed Burke Million Futurity and was a half-length winner against maidens in his last start. He will be ridden by Oscar Andrade Jr. for trainer Jose Flores.

J. Francisco Diazs Sweetie Cartel is the 2-1 favorite in this race after breaking his maiden by two lengths in her last start. If Sweetie Cartel can repeat that start, everyone will be watching her back tonight.

Nichols will be a part of the feature event on Saturday night as well, as he is part of the group that owns Captin Obvious, who will make his debut in the eighth race of the evening. First post for the first race on Saturday is 7:35 p.m. (PDT).

Captin Obvious is a colt by Favorite Cartel out of the top broodmare Summertime Quickie, the dam of 2008 AQHA champion 2-year-old Foose. Summertime Quickie is also the mother of graded stakes winner Flay and the stakes placed runners Summertime Favorite and Asyouwish.

Nichols will have another top Quarter Horse in action in next Sundays Grade II Golden State Derby with Long Time Favorite. He will be facing a field headed by Grade 1 winner Tell Cartel and fastest qualifier Circle City.