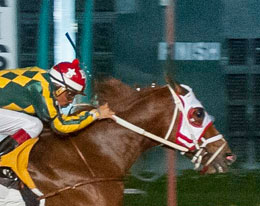 Saturdays eight-race program will feature a promising group of juveniles led by a trio of first-time starters out of notable broodmares.

Debuting from post number one in this 300-yard dash will be Paul Jones, Howard Nichols and Thompson Racing Inc.s Captin Obvious, a colt by Favorite Cartel out of the superstar mare Summertime Quickie.

Sired by Royal Quick Dash, Summertime Quickie produced gold in the form of the millionaire Foose, the champion 2-year-old colt who won the Grade 1 Ed Burke Million Futurity and Grade 1 Los Alamitos Super Derby. Standing at Burns Ranch, Foose has been one of Californias top stallions for close to a decade now. Summertime Quickie is also the mother of graded stakes winner Flay and the stakes placed runners Summertime Favorite and Asyouwish.

The third runner debuting in Saturdays eighth race is Verifiable, a Walk Thru Fire filly out of Realistically, a solid broodmare who has already produced stakes winners Vivid and True Copy. She is from the family of stakes winners Fedexer, Seldom Happens and more.