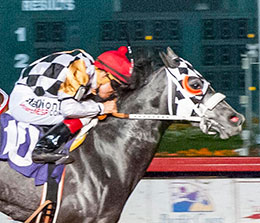 Tequila Sangria has faced the opposite sex before when running the prestigious Grade 1, $600,000 Champion of Champions last year. That field featured the best of the best in Quarter Horse and was headed by eventual AQHA World Champion He Looks Hot.

The Flight 109 will feature three males plus one other mare, but none of them have previously won a stakes race at Los Alamitos.

"Wed like to run her at 350 yards once before going 400 yards in the Millie Vessels," trainer Mike Casselman said. "Id rather run her against females and the (Flight 109) is a tough race, but it is okay. Id like to see her have a race. We gave her a turn and work (on June 27) and she did well. We took her to the starting gate to school her on Wednesday and that also went well."

Tequila Sangria, a winner of five of nine career starts, captured the Grade 1 Charger Bar Handicap on January 5 in her only start of 2020. She went to Burns Ranch following the Charger Bar before returning in the middle of May to begin preparing for her summer and autumn campaigns.

Jesus Rios Ayala will pilot the daughter of 2020 Leading Sire of Money Earners Favorite Cartel in the Flight 109.