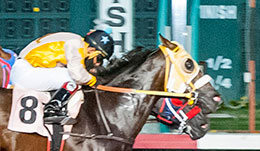 The trials will begin in race number three with the top names in the opening heat being Les and Kim Sweetings BF Outfoosed and and J. Francisco Diazs Sweetie Cartel. BF Outfoosed is the only runner in these trials that has qualified to two futurities at Los Alamitos this year.

The gelding by Foose ran in the Grade 1 Ed Burke Million Futurity final on June 21 and was fourth in the Restricted Grade 1 Governors Cup Futurity on July 25. Meanwhile, Sweetie Cartel will look to make his first futurity final and comes in on torrid form after winning each of his last two starts.

The second trial will be headed by Cesar Nunezs Squid Word, who finished a nose behind stablemate Constituent in the $320,000 Governors Cup on July 25. Trained by Valentin Zamudio, Squid Word enters this trial as a maiden, as hes finished second in each of his last three outings. This trial will also feature Ed Burke Million finalist Thats R Best Card and Robert Adair Kindergarten Futurity finalist Bob E McGee.

Race number five is the third trial of the night and will see Bella Valenzuelas Governors Cup third place finisher Opt Out and Cedar Creek Tree Farm Ranch and Racings Kindergarten third place finisher Unstoppable One. Paulo Freire Macedos Reason To Fly MV is another runner to watch as he comes with a perfect record after two starts.

A winner of $186,372, Terrific Temper has finished second in all four of her career starts. Monopolist enters after running second in the California Breeders Freshman Stakes. The final race and trial of the night is a wide-open contest led by John Deere Los Alamitos Juvenile Challenge winner Royal Racy Perry and recent maiden winners AP A Special Takeoff, Rite On Time and Eagles Royal Dynasty.