Seven Distaffers Entered in Will Rogers' Miss Ellen Stakes
Saratoga Returns won an allowance in her last start on October 3 at Will Rogers Downs. 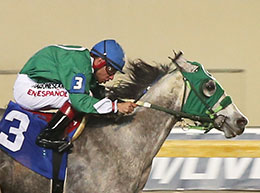 A homebred daughter of world champion Apollitical Jess trained by Clint Crawford for owner Brenda Reiswig, Sizzling Fajita is coming off of a three-quarter length victory in a 300-yard, $15,200 non-winners-of-three allowance dash at Will Rogers Downs on September 18. The 3-year-old filly drew post 3 and will be ridden by Mario Delgado.

Saratoga Return is a homebred 4-year-old High Rate Of Return mare owned by Marili Mendez. Saratoga Return will be stretching out in distance off of her head victory in a 300-yard, $16,000 open-condition allowance at Will Rogers Downs on October 3.

Saratoga Return has earned $28,884 from five outs in Oklahoma and Texas this year, and his season record includes a second-place finish, a neck behind winner Hopey Chick, in the 350-yard, $30,000 Selma Stakes at Retama Park on the Fourth of July. The mare drew post 7 and will be ridden by Juan Pulido for trainer Fidencio Jimenez.

All Will Rogers Downs races can be seen at Q-RacingVideo.com.